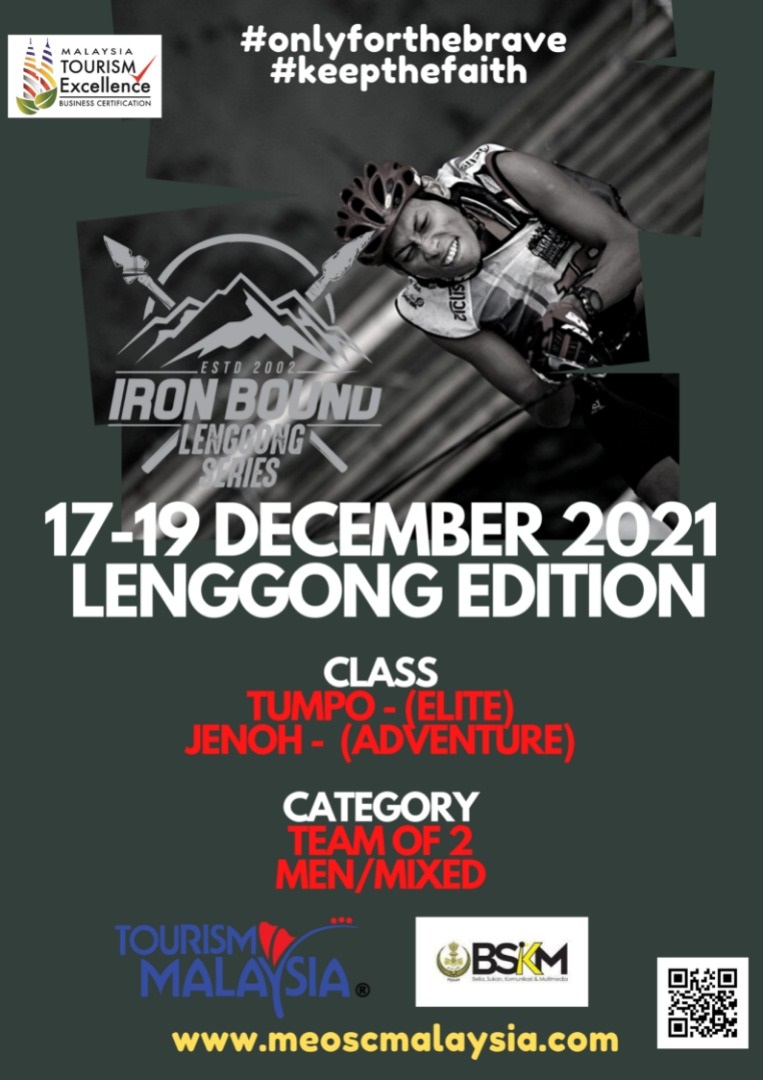 IRON BOUND SERIES is an adventure racing sport in Malaysia which has its own standard and class. It is a prestigious event organised internationally since 2002. In 2003, the IRON BOUND SERIES event had received an award from SPORT TOURISM MALAYSIA under the category “Certificate Merit of Event”.

IRON BOUND SERIES has been organised within two generations and there are 11 editions of it starting from 2002 until 2015. This adventure racing sport is also believed to emphasising a very extreme kind of sport in Malaysia, various formats were used such as SPRINT WARRIOR, STAGE RACE and 24HOURS RACE, because that is what the IRON BOUND SERIES is known as THE ULTIMATE MALAYSIA ADVENTURE RACING SPORT.

THE BASIS OF DISCIPLINE IN THE IRON BOUND SERIES RACING

CLASS – TUMPO | JENOH (THIS RACE IS SELF FULL NAVIGATION FORMAT)

• RACE RULES AND REGULATIONS WILL BE ANNOUNCED IN THE NEXT BULLETIN

• THE RACE TENTATIVE WILL BE ANNOUNCED IN THE NEXT BULLETIN

• ACCOMMODATION LIST FACILITIES WILL BE ANNOUNCED IN THE NEXT BULLETIN

• CASH PRIZES WILL BE ANNOUCED IN THE NEXT BULLETIN

The 11th IRON BOUND SERIES this time will take place in LENGGONG, PERAK, rich in nature, local cultural customs and also very tasty traditional food. LENGGONG is a town, a mukim and a parliamentary constituency in Hulu Perak District, Perak, Malaysia. The LENGGONG VALLEY in HULU PERAK is one of Peninsular Malaysia’s most important areas for archaeology, as excavations have revealed many traces of Malaysia’s prehistory. It is the site of the oldest known place of human activity in the Peninsula. Today it is still a rural area, with small kampongs surrounded by green vegetation and limestone hills. LENGGONG can be likened to an open-air museum, and is home to legends, skeletons, cave drawings and precious finds such as jewellery, pottery, weapons and stone tools. Many of the caves in the LENGGONG area have revealed evidence of ancient humans having lived and hunted in this area. The LENGGONG VALLEY was listed by UNESCO as a World Heritage site on 30 June 2012.

LENGGONG is accessible by trunk roads connecting it with neighbouring towns and cities. The town of LENGGONG is situated some 100 kilometres north of Ipoh on the Kuala Kangsar to Grik road (highway 76). The road to LENGGONG is surrounded mostly by oil palm estates and jungles. As cows and buffalo are part of the agriculture, they are often seen along the road. The jungles (about million years old) are now in danger of heavy illegal logging.

To visit LENGGONG, from the North–South Expressway take Exit No.143 at Kuala Kangsar – that’s about 3 hours away from Kuala Lumpur. Then take Route 76 to LENGGONG. The new highway is open and has replaced the old scenic kampung road.

Malaysia is considered a very young country archaeologically with a very recent prehistory. In Africa, the predecessors of the human species originated about 3 – 5 million years ago. Their descendants migrated out of Africa and their prehistoric remains have been found all over Europe and Asia. Both Java Man and Peking Man date back to about 300,000 years ago. In Malaysia, the earliest remains is a human skull found in the Niah Caves in Sarawak and dates back some 40,000 years. In Semenanjung (Peninsula) Malaysia, the story is even more recent and starts in Lenggong about 31,000 years ago. Incidentally, many people think of the Bujang Valley in Kedah as being one of the oldest sites, but its history only stretches back about 1,500 years. All the archaeological remains found in Lenggong have been associated with caves. The two exceptions are the Kota Tampan and Bukit Jawa sites. These two are Peninsular Malaysia’s only Palaeolithic sites.

Kota Tampan is the earliest known site of human inhabitation. Excavations at Kota Tampan which began in 1938 revealed an undisturbed stone tool production area. Pebble tools were made using equipment such as anvils and hammer stones. Some 50,000 pieces of stone have been found and recorded. The culture at Kota Tampan is referred to as Tampanian. The workshop was initially dated at 30,000 years old, but this figure has now been revised to 75,000 years. Although the Kota Tampan workshop site is currently on a hillside, and in an oil palm plantation, the original site was on a lake shore. It is thought that the workshop was disbanded roughly 75,000 years ago due to a volcanic eruption at Lake Toba in Sumatra, some 250 kilometres away. There is a large gap of some 17,000 years between Kota Tampan and the next archaeological site, Gua Gunung Runtuh, which has been attributed to the devastating effects of the Toba eruption.

More recently, a team has been excavating a site at Bukit Jawa, and this has been dated at 200,000 years old. Bukit Jawa is therefore far older than the Kota Tampan workshop, which is just 6 km away.

The LENGGONG VALLEY in upper Perak, is an important archaeological site where evidences of human settlement from the Palaeolithic age were found. Important archaeological sites include Kota Tampan, Bukit Jawa at Kampung Gelok and Kampung Temelong. The most famous archaeological findings in Lenggong was Perak Man, the 11,000 years old human skeletal remains which was discovered in 1991. 100,000-year-old stone tools have been excavated at Kampung Geluk and Kampung Temelong. There has also been proof that Gua Harimau was a site of bronze manufacture during the Bronze Age. There is also the Lenggong Archaeological Museum at Kota Tampan where artefacts excavated from the area are displayed. The museum is located within an oil palm estate on the road from Kuala Kangsar to Gerik (or Grik).

LENGGONG’s prehistory extends back to the Palaeolithic or old Stone Age, but most sites are more recent, from the Neolithic or new Stone Age. The Palaeolithic period occurred from 2 million – 10,000 years ago, and the people at that time were the first tool makers, who lived by hunting and gathering. During the new Stone Age the tools had been improved, and pottery was used, and the people practised farming. All the archaeological remains found in Lenggong have been associated with caves, with the exception of Kota Tampan and Bukit Jawa. There remain Peninsular Malaysia’s only Palaeolithic sites.

Gua Gunung Runtuh is situated in Bukit Kepala Gajah or Elephant’s Head Hill. In the same hill other caves have yielded archaeological remains such as stone tools and food remnants, but no more skeletons. The caves were probably used as temporary shelters as seasonal or hunting camps, whereas Gua Gunung Runtuh was lived in for longer periods. The next oldest site is Gua Harimau or Tiger Cave. It is about 3 kilometres away from Gua Gunung Runtuh and is an isolated site, and was probably used as a burial ground some 5000 – 3000 years ago.

Seven human skeletons have been found (but no tiger bones), also bronze axes, and various articles of jewellery such as chains, bangles, earrings and bead lockets. The bronze axes show that there was an early Bronze tradition in Malaysia, as well as in north Thailand and China. It is the earliest use of metal in south-east Asia. Porcelain containers of various shapes and sizes were also found containing meat and siput shells (a generic name for snails). Archaeological digs in other caves have revealed pottery, axes stone tools and flakes. Also food remains, and in some sites, human bones. Unfortunately some caves have been disturbed by guano diggers and any remains have therefore been lost.

Gua Puteri is a natural tunnel which pierces Bukit Kajang. There are no archaeological findings here, but instead the cave is known for its legends. Two stalagmites are believed to be a prince and princess who guard the cave. Locals say that if children climb up the stalagmites they will fall sick. Negrito cave drawings have been found at various sites but are not prehistoric, as they are only about 100 years old.

Gua Badak is one of the main places for these drawings, situated about 10 kilometres north of LENGGONG. The Negritos are one of the aboriginal tribes of Malaysia. The Lanoh Negrito made the illustrative recordings of their every life. The charcoal drawings were first discovered and documented in the 1920s by Ivor Evans. They were then thought to have been lost by quarrying, but were rediscovered in 1992 and hopefully will now be preserved as a national heritage. Luckily most of the drawings survived the blasting, although some are missing, believed destroyed. And unfortunately modern graffiti covers some of the original drawings.

Unlike cave art at places such as Lascaux in France, which date back some 15,000 years, the Negrito drawings are “modern” art. The Negritos used the caves as shelters during hunting trips. The sketches depict tribal art such as animals, people, trees, mats, and even bicycles and motorcars. Apart from the charcoal drawings, they made white pictures by scrapping away the limestone rock. The drawings are simple, featuring matchstick men. There is a man carrying a pole laden with coconuts. A bow and arrow symbolise the hunting tools which were replaced by the blowpipe. There are men on horses, a man with an elephant, a hunting party. Animals such as leaf monkeys, monitor lizards and porcupine all made for a good meal and were therefore illustrated.

The Lanoh Negritos are still found in Perak today, generally working on rubber and oil palm estates, although some do still hunt. They are formed into six tribes. Most of the old troglodytes or cave dwellers of the Malay Peninsula temporarily lived in caves and rock shelters. They lived mainly by hunting, evidence shown by the remains of animal bones and molluscs. The people may have painted their bodies using red iron oxide. They used stones and slabs for grinding up substances such as salt, and all their tools were made of stones. Flakes were used as knives or scrappers. So it can be seen that the LENGGONG area is very important as it contains much evidence relating to the prehistory of Malaysia. It is the oldest area where remains have been found, and all the sites are situated conveniently within a small area.

Lenggong is also famous for its freshwater fish dishes. One local delicacy from freshwater fish is pekasam, where the fish is marinated in salt and toasted rice, followed by fermentation for two weeks